Happy March! It’s the analytics holy grail this time of year with the greatness of March Madness upon us! The tournament begins today with the first set of 16 games and will conclude on April 4th with the National Championship in New Orleans, Louisiana. The field of 68 was released on Sunday the 13th and it was not without controversy.  Some notable names and resumes of Texas A&M and Wake Forest were left out of the field in favor of Wyoming, Notre Dame and Michigan who some would argue had significantly weaker resumes.

For the sake of this discussion, we’re only going to discuss the field of 68 and more specifically, the top 13 seeds of each region. These 52 teams include all of the at-large bids and also the strong auto qualifiers from the mid major conferences. Additionally, due to the nature of the tournament, seeds 14-16 are mainly teams that find themselves at the top of their conference but at the bottom of the college basketball pool as a whole. I know, I know, who am I to judge a 14/15/16 seed when they are the ones who cause the crazy upsets but for the sake of nicer numbers and better averages we’re excluding teams that are seeded 14-16.

We determined each team’s actual seed, Ken Pom ranking and NET ranking and then from there created a new value for each team from the average of their Ken Pom ranking and NET ranking, a number we called their “Metric Seed”. We then compared this new Metric Seed to the actual seed from the NCAA to find out which team’s should be ranked higher or lower, both on a 1-16 level (Macro) and on a 1-68 (seed) level so let’s dig in with a look at each region of the bracket! 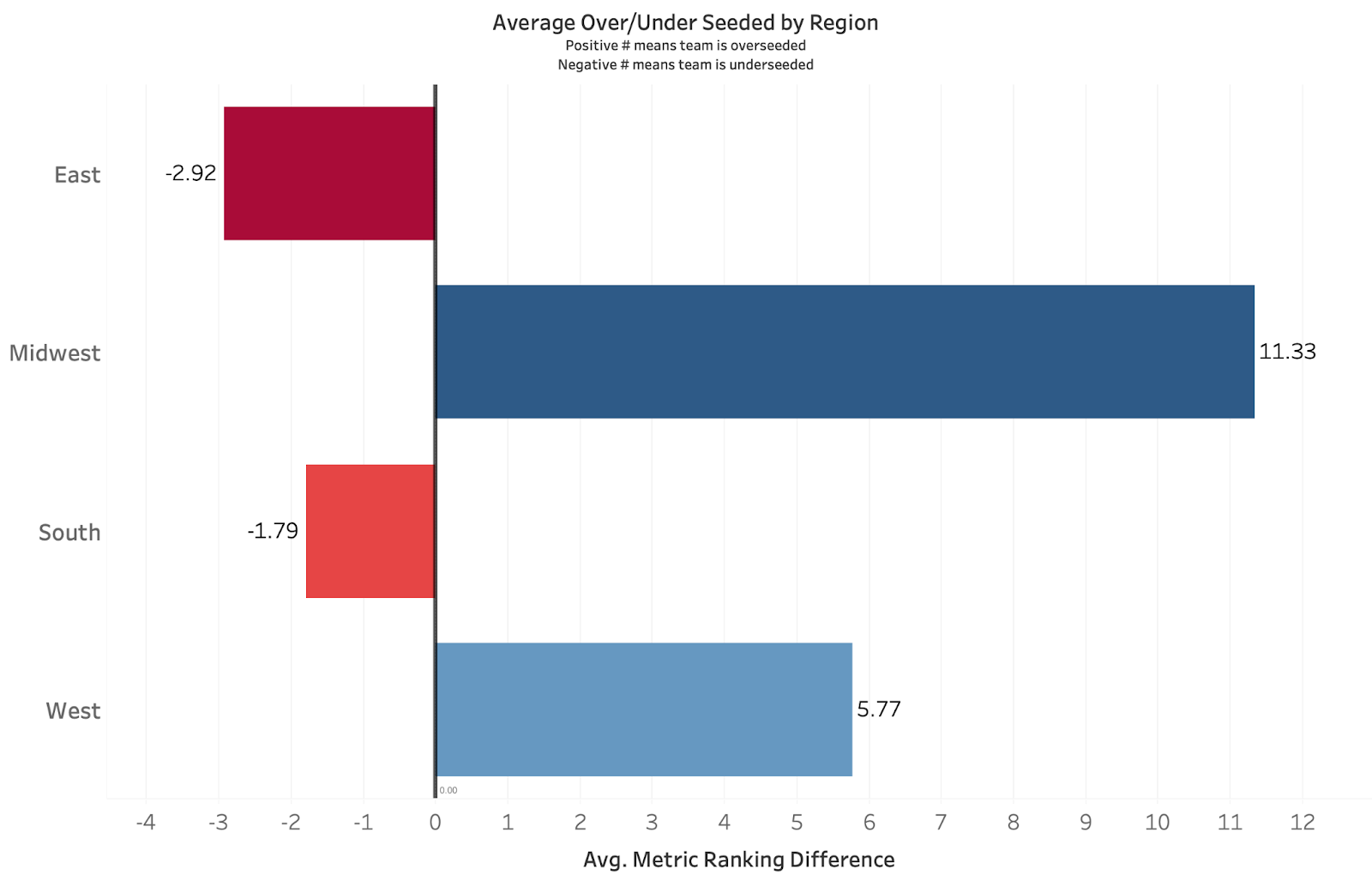 Based on this graphic, it would appear that the midwest is the weakest region of the bracket with each team being ranked 11 seeds too high on average and only three teams from the region are underseeded (Iowa -6.5, LSU -3.5, SDSU -7.5).

The disparity is the same numerically but seems even worse in context when looking at what each team would be seeded using the Macro level similar to the commonly understood visual of a bracket that the NCAA uses. The midwest once again appears to somehow have every team overseeded by an average of 2.417. Utilizing Metric Macro Seed, the region does not have an actual 1 seed with Kansas being ranked 6th, the 2nd best two seed according to metrics. Their 3 and 4 seeds of Wisconsin and Providence respectively aren’t even in the top 5 of teams in that region according to our metric macro seed. That belongs to, in order, Kansas (2), Auburn (3), Iowa (4), LSU (5), San Diego State (6). While that may mean they are loaded with mid-tier talent, it may not bode well for Kansas and Auburn whose paths to the tournament may be harder than meets the eye.

Switching focus to the East, the committee did well in this region with many teams being very close to their actual seed. 8 of the 17 (Indiana and Wyoming are in a play-in game) teams from this region are underseeded while 9 of the 17 are overseeded: almost a perfect balance.

This region is one of the strongest regions in the bracket according to Metric Macro Seed with 12 teams that would be a 10 seed or better in the metric system as well as six teams who would find themselves a 5 seed or better under the new metric system. The East has lots of strong teams, but they also have teams that fit their spot well. So yes, while they may have teams that may be better on average than other regions, the NCAA nailed their seeding in this region.

In terms of just teams the NCAA missed pretty badly on a couple. Providence is the first one that comes to our mind. Based on the metrics, Providence should be a macro seed of 11, yet the NCAA has them as a 4. Could they be on upset alert early in this tournament? If you trust in the metrics, their game against South Dakota State could be much closer than the seeds would suggest. Staying in that midwest region we have our next two highest overseeded teams of the 10 seeded Miami, being overseeded 6 seeds (Yes, they should be a 16 according to this metric…) and Creighton being overseeded by 5, lowering them down to a 13. Look for USC to take their game over Miami easier than normal and San Diego State.

The committee had some large misses on the other end based on the metrics though. Mainly looking at Houston. Based on the Metric Macro seed, Houston should be on the 1 line and yet they find themselves seeded a 5 by the NCAA, not good news if you’re Illinois or Arizona! To make matters worse, our second most underseeded team is just a couple lines below Houston in that south bracket in Loyola-Chicago, an NCAA 10 seed with a Macro Suggested seed of 6. Bad bad news if you’re Ohio State, who we have as an actual 8 seed… Maybe this one isn’t as obvious but vegas has the line at EVEN. If that moves a smidge towards Ohio State, take that Loyola bet and run like the wind.

So, who did we miss? Who do you think the committee got right but the metrics are wrong? Is there any team that you agree with us on? Let us know and let the madness begin!