The sport of Formula 1 is currently experiencing one of the worst parity problems that I have ever seen from any sport and this weekend was a clear indication of that as fans of the sport needed any more reason to believe the issues. Before we get any further though, let’s recap the Belgian Grand Prix at Circuit de Spa-Francorchamps. 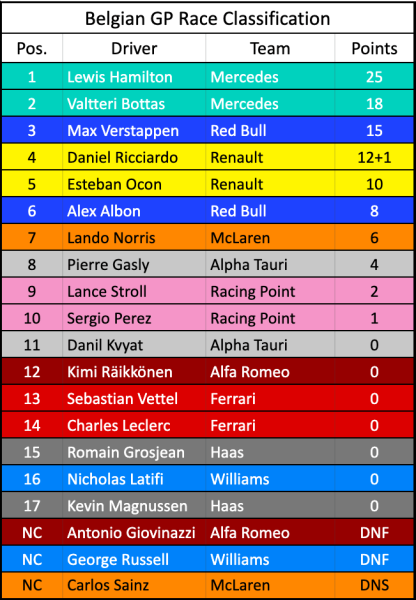 The classification for this race was a very similar story to the rest of the year at the top but outside of the top 3, there were some interesting surprises! The Renault F1 Team displayed a more consistent showing of their pace that we had seen in flashes throughout the earlier races this season.With Daniel Ricciardo and Esteban Ocon both reaching Q3 and qualifying P4 and P6 respectively, the race outlook was bright for the French team still looking for its first podium this year. Coupling that strong start with outstanding defense and the fastest lap of the race from Ricciardo, solid strategy across the board, and a brilliant overtake by Ocon on Alex Albon during the final lap of the race, Renault took home their biggest point haul and best-combined finish of the season!

Another strong performance came from the Frenchman Pierre Gasly, racing with a heavy heart on the weekend of the one year anniversary of the passing of close friend and fellow Frenchman Anthoine Hubert, who brought home P8 and at one point was running all the way up into P4. Gasly didn’t entirely set a strong qualifying time, not making it into Q3 and qualifying P12, but did set his time on the hard tires which allowed for him to race a longer first stint than all but one other driver (Sergio Perez who was also on the Hards). Gasly’s only kryptonite in this race was the oh-so-common Safety Car that came out on lap 10 which allowed his competitors a free pit stop to switch tires and lessening the advantage that Gasly had built up until that point. Gasly was still able to produce a strong finish and come home P8.

Even though his successes are something that fans have come to being used to, this race was one of Lewis Hamilton’s finest. Barring a tire disaster like the British GP or some form of a mechanical problem similar to the one that we saw in Austria, this race was over on Saturday. Hamilton, in what was his last race with the so-called Party Mode, ran away from everyone in qualifying setting his pole position lap time over 5 tenths quicker than teammate Valtteri Bottas and then cruised through the race. He built a large gap between himself and Bottas early and then repeated the feat after the safety car all while managing his tires brilliantly. In a race where before today Hamilton had more retirements (4) than victories (3), he once again proved that he is the most dominant racer of the 2010s and arguably of all time.

Surprisingly, this race was also a strong one for Alex Albon and Red Bull. The Belgian GP was the first time that Albon had driven the race in a Red Bull for the second time outside of the repeat races this year due to him making his debut for Red Bull at Spa in 2019. During his time at Red Bull, Albon has struggled on Saturday in qualifying but has made up places during the race. Even though he finished a place below his qualifying spot, his P5 on Saturday and P6 during the race points to an upward trend in form and improved consistency that Helmut Marko, Christian Horner, and the entirety of the Red Bull Racing organization should be very excited about.

In a year that we didn’t think it would be possible for situations at Scuderia Ferrari to get worse, they managed to get worse. Even though the Ferrari hasn’t looked great all year, the Prancing Horses have had success at Spa in recent history with Sebastian Vettel winning in 2018 and Charles Leclerc winning in 2019. Ferrari failed to even come close to those standards or even the relative success they’ve had this year with both cars failing to reach Q3 for the first time since 2014… The race wasn’t much better for them as they finished in their same qualifying positions even though Leclerc was in P9 at one point. 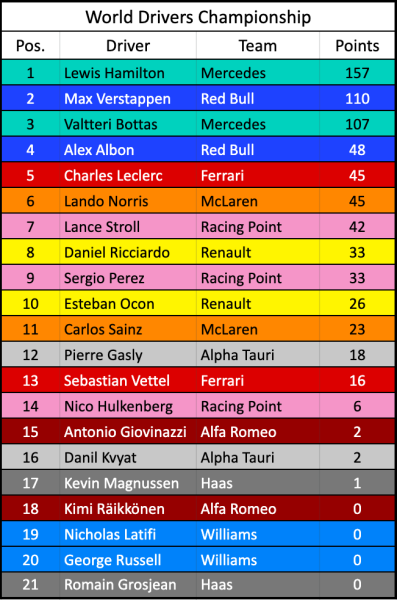 F1 is currently having a parity and competition crisis. Depending on which team you cheer for, this is either a great thing or a bad thing. Mercedes has dominated the sport on a level that hasn’t been seen in other sports arguably since the Bill Russell Celtics of the 60s. There hasn’t even been a relative competition. Just look at the current World Drivers’ Championship standings. Lewis Hamilton is holding a 47 point advantage over Verstappen in second and even he and Bottas are miles away from the rest of the drivers. It’s so bad that in Shift F1’s podcast before the Spanish GP someone asked a question about whether Nico Hulkenberg’s 6 points would be enough for 16th place in the championship at the end of the year. Hulkenberg filled in for Sergio Perez for one race when Perez tested positive for COVID-19. Haas, Alfa Romeo, and Williams all have struggled to reach the P8-P10 range during the race, let alone finish there with only Magnussen and Giovinazzi scoring points from those 3 teams. Hulkenberg’s 14th place in the championship looks to be a solid bet with him being in 16th or better only having better odds.

The main issue of parity in F1 is not at the bottom but rather at the top. With the gap from 4th to last being 48 points and the gap from any 4 consecutive places being around 10 points, the midfield this year is an intense battle with drivers at risk of losing more than one position every week with a bad race. That 48 point gap from 4th to last, however, is smaller than the gap from 3rd to 4th and also the gap from 1st to second. Nobody is catching the Mercedes except for the most talented driver (arguably) on the grid in Max Verstappen. He’s the only driver outside of Mercedes’ Hamilton and Bottas to win a race or even be a threat to the lead. There are only 2 drivers other than the Mercedes Drivers to have made Q3 in every race this year: Lando Norris and Max Verstappen. F1 has often been a sport all about who has the best car and Mercedes absolutely has the best car in their W11 this year, but their car has been so dominant that every race except for the opener at Austria and the wild British Grand Prix has been a race that was over at Lights Out. They’ve qualified on pole in every race and have locked out the front row in all but one. This season is practically over in terms of podiums and the Drivers Championship and it’s week 7. Sadly, change isn’t entirely coming soon. Due to COVID-19, the budget cap introduction was pushed back to 2022 and only partially introduced in 2021. The only hope that F1 fans may have is the FIA’s decision to only allow for one engine mode throughout an entire race, but we will have to wait until next week to see if that has any effect on the sheer dominance of the Mercedes in the sport today.

One thought on “The Hot Lap: Belgian GP and Season Summary”